← Back to All Patient Stories

They saved my life that day!" 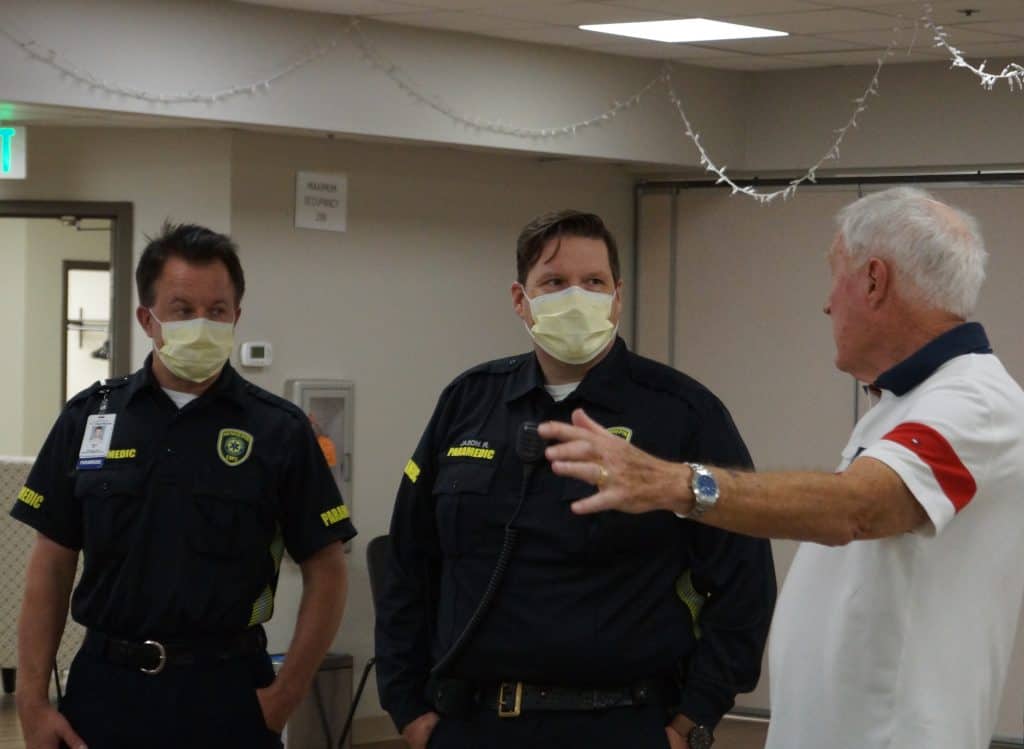 When Jerry Martin got on his bike for his usual morning ride from Victoria to Shorewood this past June, it seemed like another routine trip to the South Shore Senior Center for a morning filled with coffee and laughter with his friends. But it soon became clear to the retired Marine Lieutenant Colonel and Vietnam Veteran that something was very wrong.

“I arrived at the center and was in a cold sweat – I was out of breath and having discomfort in my chest and was very pale,” said Jerry. At first, Jerry tried to shrug it off. “I thought if I just sat and rested, it would pass and I’d be ok, but it didn’t.” One of Jerry’s friends assisted him as another called 911. Hennepin EMS paramedics Jason Robarge and Aaron McAllister responded to the 911 call along with our first responder partners at the Excelsior Fire District and the South Lake Minnetonka Police Department.

Shortly after arriving on scene, Paramedic Jason Robarge, who was the primary care paramedic on the call, and his partner, Paramedic Aaron McAllister, quickly assessed that Jerry was having a cardiac related medical emergency and was in need of immediate intervention and transport to the hospital. “His EKG was initially normal looking, but my gut told me he was having an MI or ‘Heart Attack,'” said Jason. “We convinced Jerry to go to the closest Level 1 Heart Center in the area, Methodist Hospital.”

The paramedics began to provide immediate ALS (Advanced Life Support) care as they gave Jerry Oxygen, Nitroglycerin, Aspirin, and an IV. “We noted as we pulled up to the emergency room and after several repeat EKGs that Jerry was indeed having an MI.” Jerry was taken directly to the heart catheterization lab or “Cath Lab” so that a cardiology team could open up what was found to be an occlusion in a coronary artery. “It was my left coronary artery, the ‘Widow Maker,’ Jerry said. “My heart stopped on the table and they had to shock me quite a few times to get me back!”

Jason and Aaron recently had a reunion with this very grateful patient. As Jerry explains, “These guys were total professionals…they saved my life that day.” Jerry is very happy and impressed with the care he received that day and the meeting with the paramedics who helped to save his life was summed up as, “Amazing, the icing on the cake, this day is just great!” High praise from the tough Marine helicopter pilot who provided medivac flights during the Vietnam War.

For Jason and Aaron, it was a great day as well. “We rarely get to follow up like this, it’s good for your soul! Jerry is a great guy and we are so glad he is doing so well,” said Jason. “Seeing and hearing about these positive outcomes is very rewarding too.”

The group of seniors, some who were there that day and helped Jerry, were very pleased as well. “We have our friend back!” said one senior. “We also had the Fire Chief come in and give us a little class on the center’s AED, you never know when you might need it!” said another.

We at Hennepin EMS thank Jerry for sharing his story and for taking the time to meet with Jason and Aaron.